It’s the last Council meeting till October, and as you’d expect, the agenda is packed. There’s a ton of shelter- and housing-related items, the aftermath of this spring’s floods, banning penguins, terrible motions from Cllrs Ford and Mammoliti, and more. Watch the livestream or follow my tweets.

END_OF_DOCUMENT_TOKEN_TO_BE_REPLACED

I’m back, bitches! On a site where I can say “bitches”! I’ll try not to go overboard. Here’s everything worth caring about on this month’s City Council agenda. Watch the livestream or follow my tweets.

END_OF_DOCUMENT_TOKEN_TO_BE_REPLACED 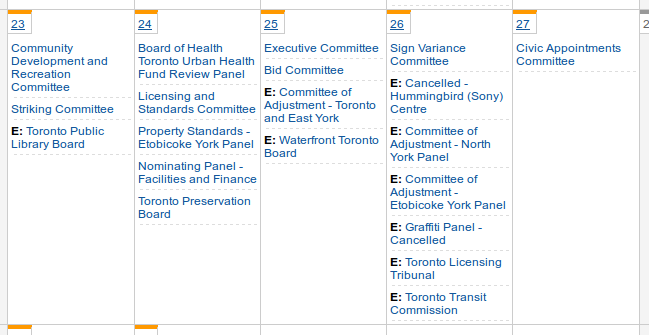 Monday’s City Council is actually a Special Meeting, and for once it’s not a transit debate that we’ll all walk out of hating everyone and everything. This time, Council will appoint fill-in councillors for Wards 5 and 20, vacant after councillors Milczyn and Vaughan levelled up to MPP and MP, respectively. You might see some familiar names on the list of candidates for Ward 5 and Ward 20. They include former Ford staffer Nico Fidani, cinephile urban legend Reg Hartt, and, uh, me. Yep. After saying on Keenan’s show that you couldn’t pay me to be Ward 20 councillor, I went and signed up, mostly as a joke…but upon consideration, I guess I know this beat pretty well.

The July City Council meeting proper starts Tuesday. (You’ll have gotten a preview of several of these items if you followed my Executive Committee livetweeting.) Here’s the full agenda and the livestream. My picks for items to watch are after the jump!