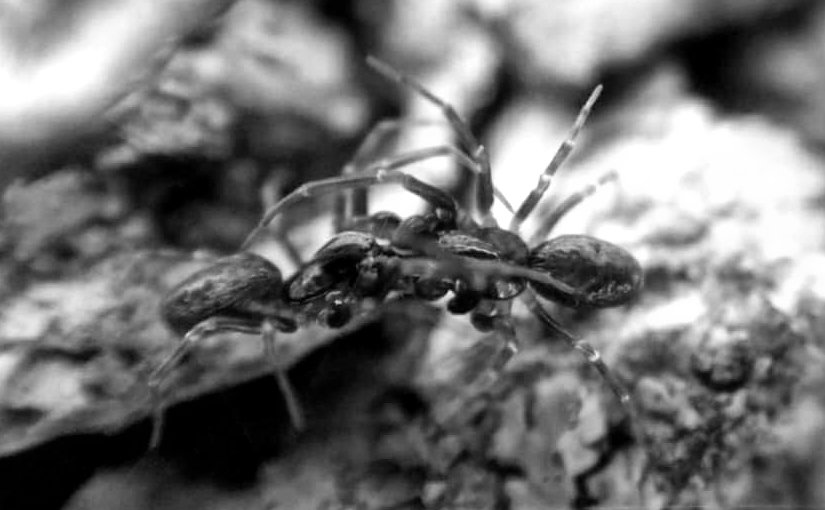 If you’re lucky and you know what to look for, you can watch mini wildlife documentaries unfolding in front of you. Back in late May I was lucky to witness mesh-web weavers courting and mating; I’m writing it up (including photos and video) because I couldn’t easily find anything else online about this intriguing behaviour.

One sunny afternoon I was looking at the trunks of the big trees along the Martin Goodman Trail, just east of the Jameson pedestrian bridge. Trees are like massive bug highways; you can find ants, springtails, mites, spiders, flies, moths, and more. This one particular tree trunk was covered in ants and mesh-web weavers.

Mesh-web weavers are a family of tiny spiders that make small, flattish, messy webs in places like the hollows of leaves, the furrows in tree bark, and around protruding bolts in human structures. The ones I see here in Toronto are cribellate spiders—instead of making sticky silk, they back-comb it with their feet to make it fuzzy and tangly. The males are dark and ant-like; the females are a little larger and have round, interestingly patterned abdomens in white and black or apricot. Males often shack up with females, sharing the same web. I’m not sure if this is rare in spiders, but I don’t think it’s the norm.

(There are many kinds of mesh-web weavers, including Dictyna and Emblyna in Toronto, but I don’t have the know-how to tell them apart. So I will just refer to them as dictynids (from their family, Dictynidae.1)

Like many other animals, spiders try to avoid direct combat with behaviours like defensive postures and bluffs. So I was surprised to find some male dictynids fighting! Not short tangles; full-on knock-down, drag-out brawls. A spider would get shoved away by its opponent, only to come back for more! 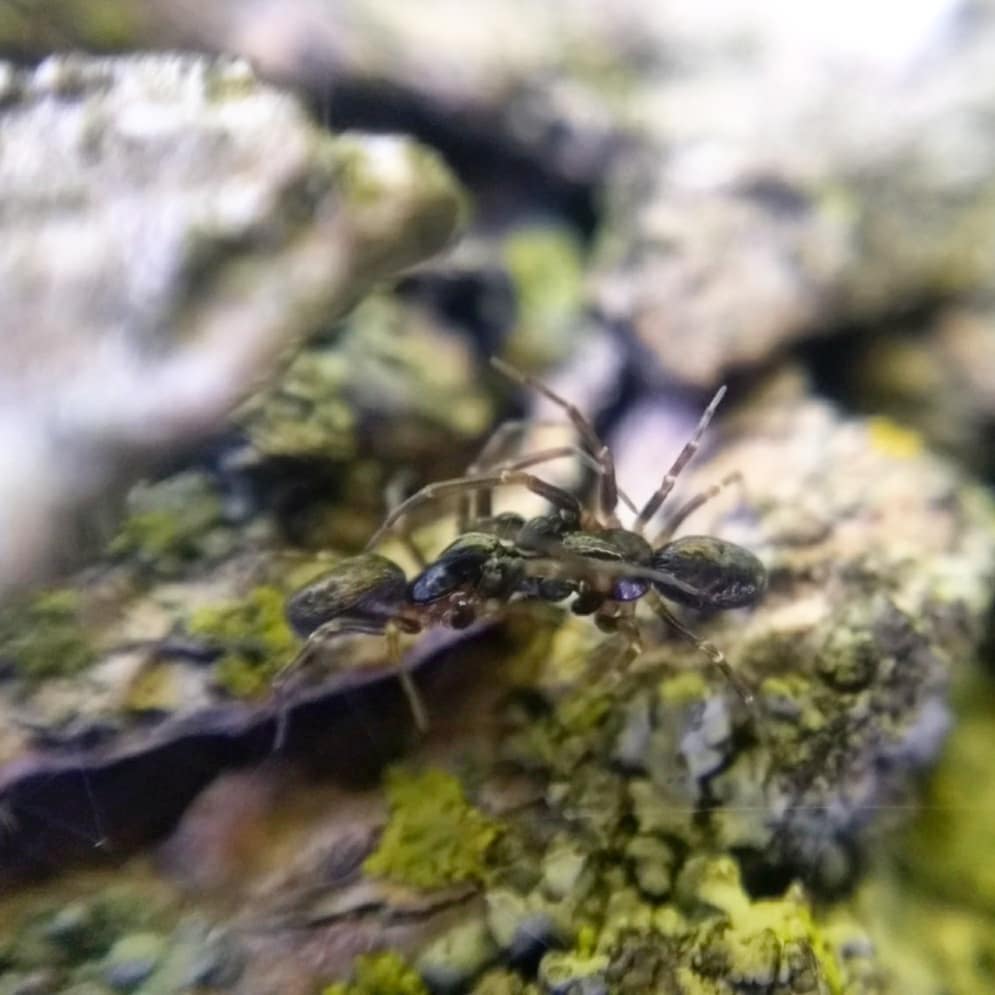 I watched one pair of fighting dictynids that were locked in a furious battle, while red ants streamed up and down the tree around them. I got the sense that one was the “defender”, holding a particular spot, and the other was an “invader”.

Then the inevitable happened. One of the spiders—the “defender”, I think—collided with a passing ant. The ant and the spider rolled around on the bark, neither getting in a decisive blow. 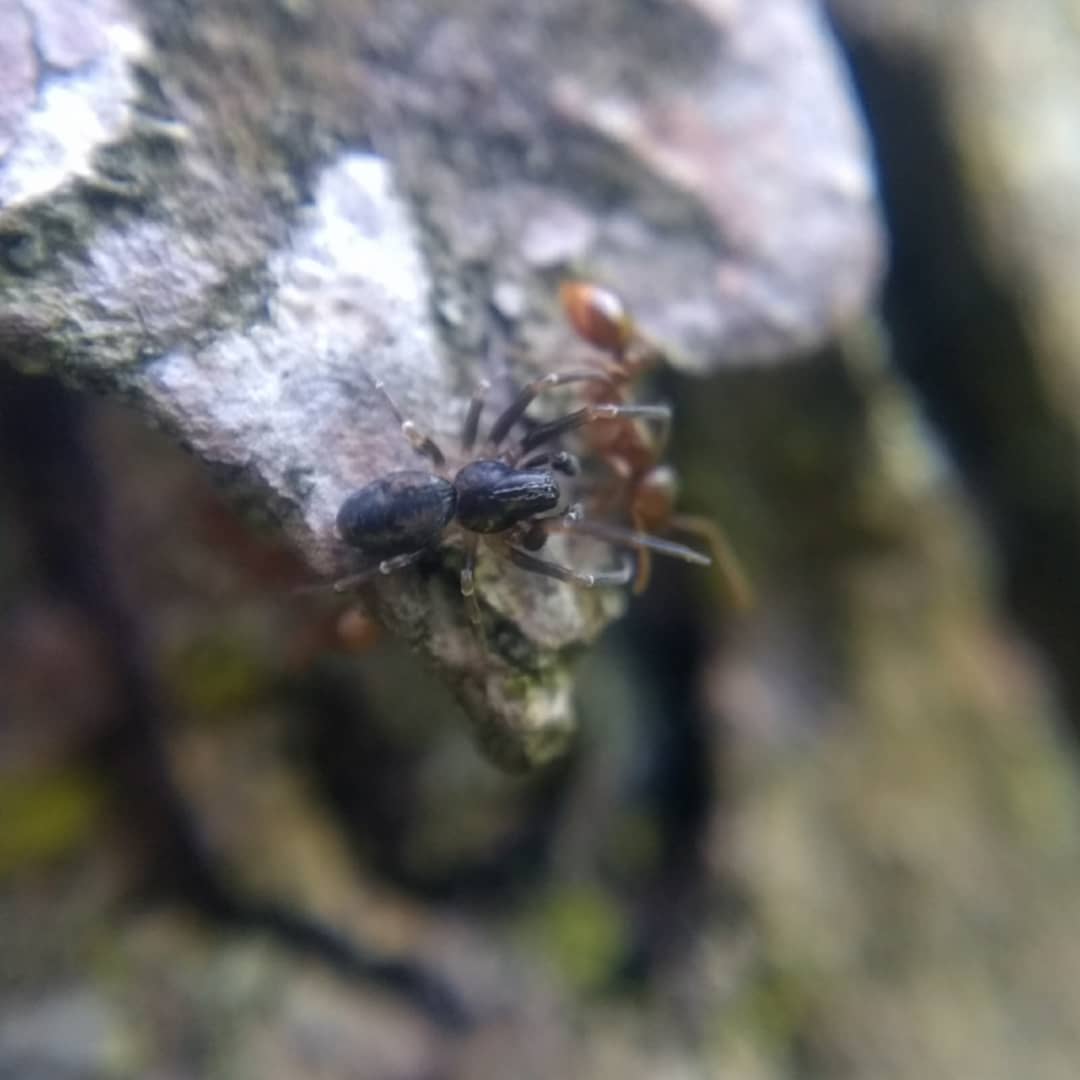 More ants joined the fray, like cops descending on a bar fight. I was seriously worried for the little guy. 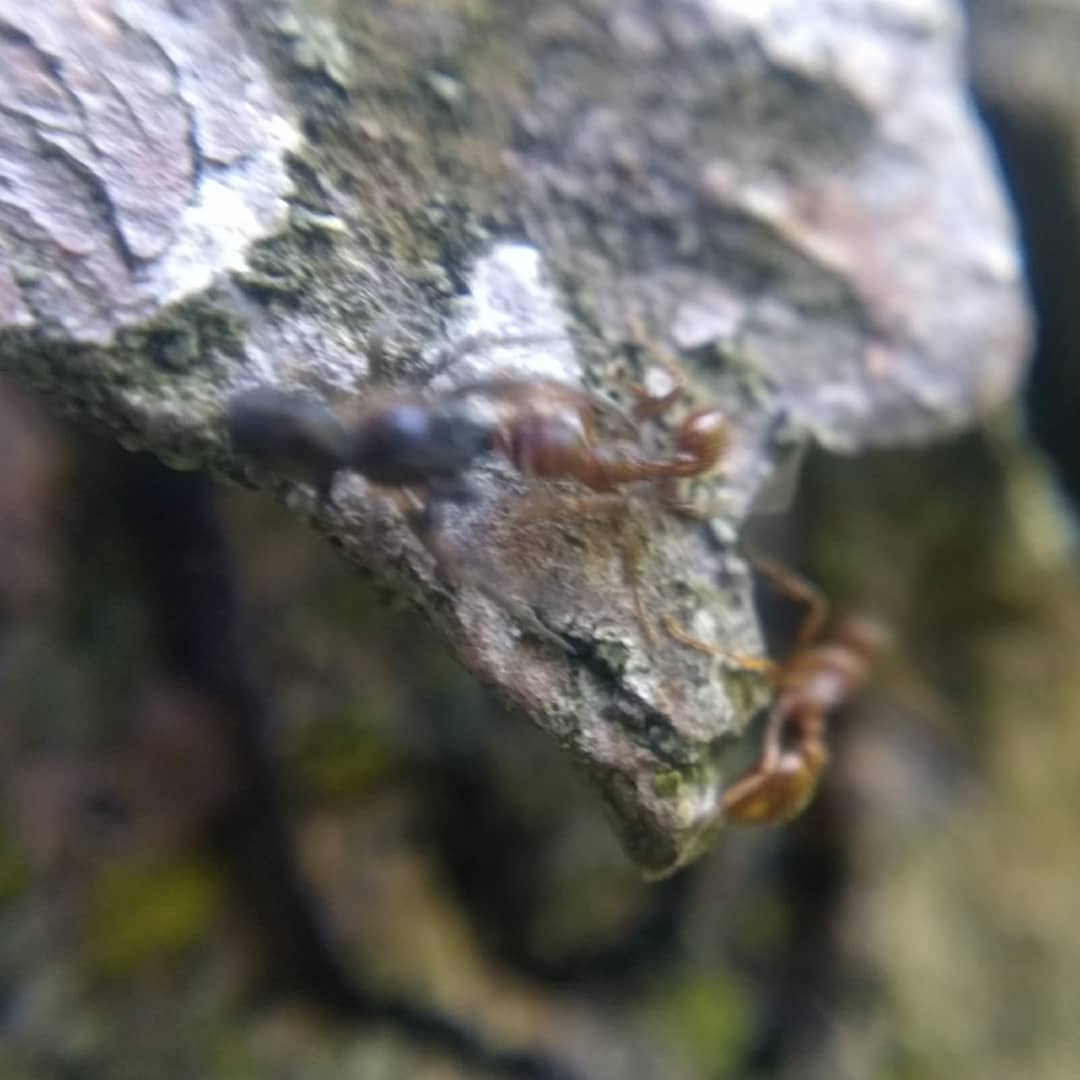 Meanwhile, the “invader” retreated to an outcrop, looking on. 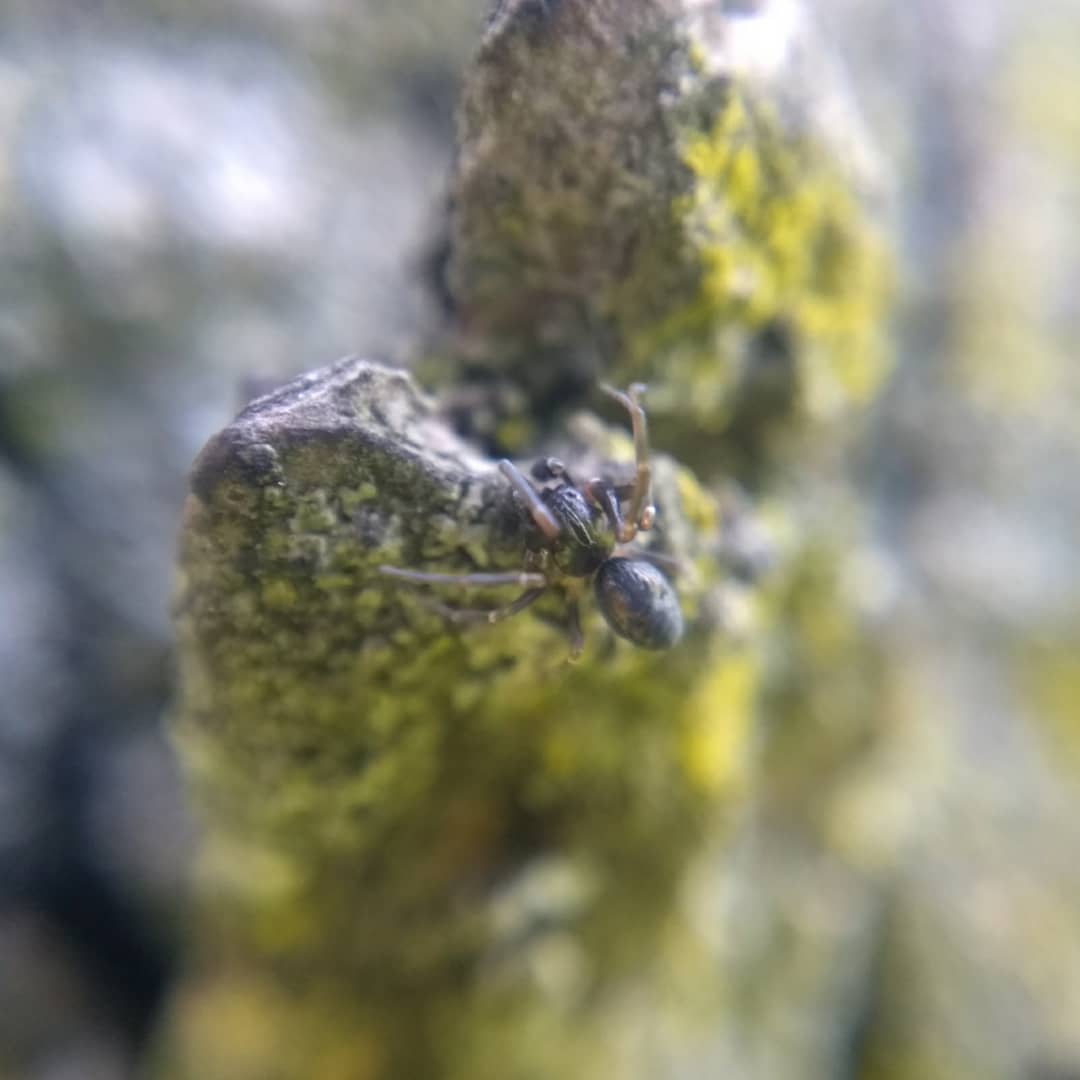 The “defender”, surrounded on all sides, found safety by flinging a fine silk line between two ridges of bark and hanging in the middle, out of the ants’ reach. 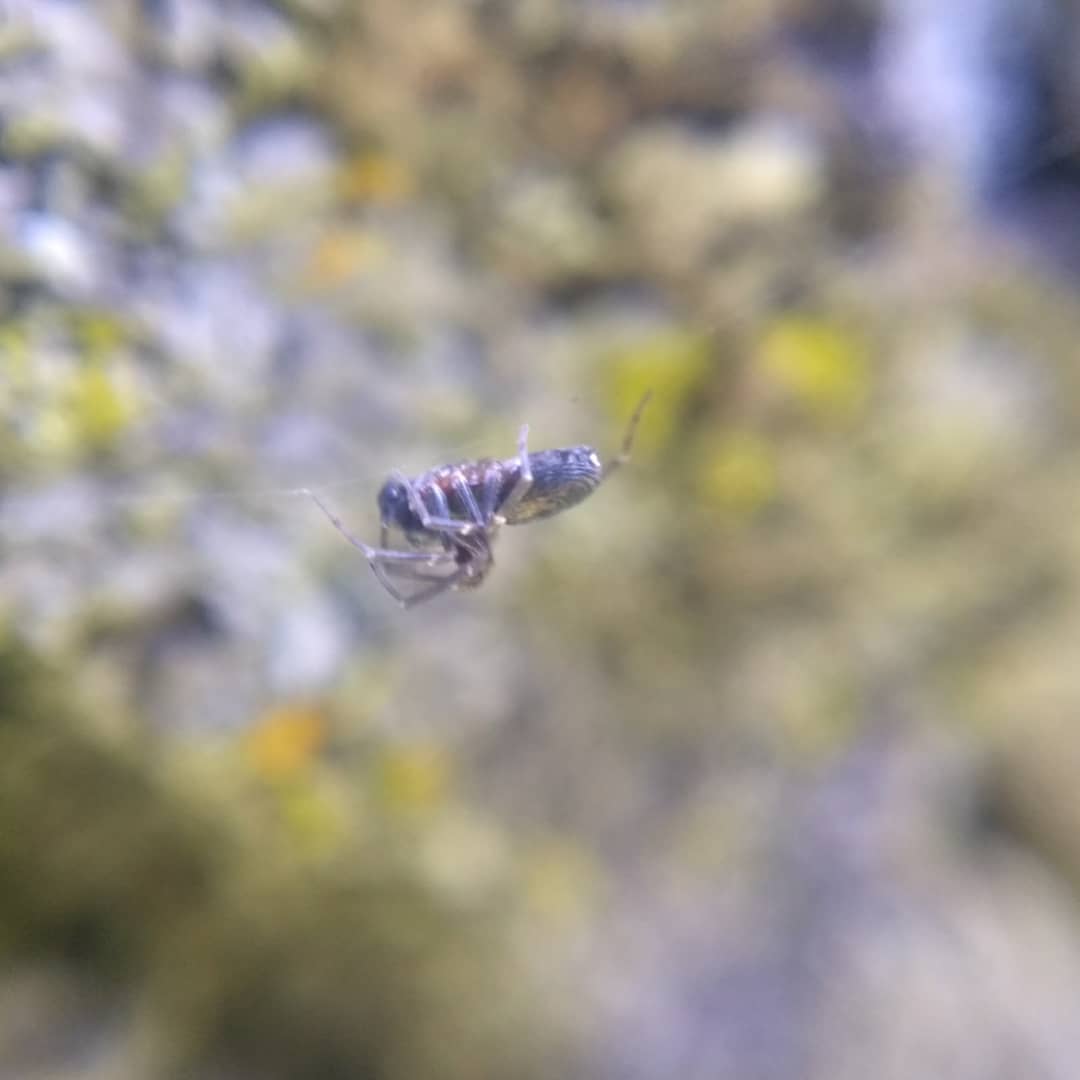 This whole saga took place in minutes across a patch of bark only a few centimetres square! It was as gripping as any action movie fight scene. But I was left wondering why exactly they were fighting.

A few days later, I came across a female dictynid who had made a little shelter in a dimple in a metal railing. I was thinking of taking a picture when a male dictynid ran up to the web, and they began a rapid-pace conversation in spider Morse code.2 It was taking a while, so I moved on.

When I came back, they were a bit closer…

To my joy, they actually began to mate—something I hadn’t seen before with these spiders. The male reached underneath the female and inserted one of his pedipalps, which he had previously loaded up with sperm, into one of her genital openings. (Two pedipalps, two genital openings.)

As they were getting it on, A CHALLENGER APPEARED—a second male sneaking up behind them.

I thought he was just waiting his turn (I’ve seen multiple male spiders hanging around a female), or would try to drive off the first male. To my surprise he slowly began to maneuver himself underneath the couple, while the female occasionally kicked him away. He was going to try to sneakily mate with her at the same time!

As the interloper desperately tried to hang on, the female shook them both off and scrambled away. “I’m too old for this bullshit,” she probably said to herself.

The males began fighting furiously—just like the ones I’d seen a few days before. Meanwhile, the female circled around and crept back into her nest.

One male decisively shoved the other away. The battle was over…FOR NOW.

Anyway, this sort of reminded me of a strategy widely used across the animal kingdom: sneaking. In some species, there are multiple types of males with distinct reproductive strategies.3 Some males are large and territorial, sticking close by a female mate; however, there are also smaller “sneaker” or “satellite” males that slide into her DMs (so to speak) and mate with her discreetly.4

Anyway, I don’t think this dictynid was a genuine “sneaker male”. Among spiders, with maybe one or two exceptions the females are larger and stronger. If anything, females are more aggressive to other females. And the two males seemed pretty much identical—unlike, for example, the dimorphic jumper Maevia inclemens, where males come in two distinct morphs with their own unique courtship rituals.

I wonder if there’s a biology term for this particular behaviour—the fighting and the sneak-mating. Do any other species of spiders do it? Is it actually an effective way for males to get their sperm in? Does it have anything to do with dictynids’ more monogamous lifestyle? If anyone out there has answers, please let me know!

One thought on “Dictynidae Drama”