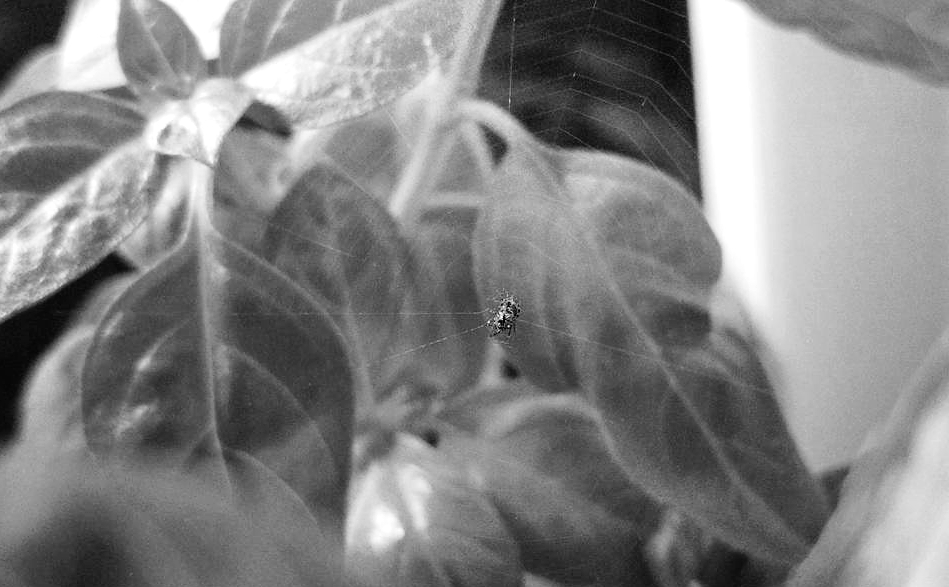 So last November, I found dozens of tiny baby orbweavers in my bathroom. They were probably the offspring of the big grey cross spider who lived just outside the window, feeding on insects attracted to the building lights.

It was bad timing. Grey cross spiders do most of their courting and mating in the fall. The spiders guard their egg sacs into the winter, until they die. In spring, the babies emerge and go their separate ways. Most will die soon after; a lucky few will survive to continue the cycle. I don’t know why this batch hatched.

I painstakingly evicted at least a dozen, but the next day they were back. I decided to let nature take its course. Over the next few weeks, they gradually disappeared, to starvation or cannibalism or other insect predators. Then, one day, I saw one I’d missed. She had woven the tiniest of webs in the basil plant on the kitchen windowsill. All her siblings had died, but somehow she had made her way to this small oasis.

It was one thing to let the spiders starve to death when they were just black specks on the bathroom ceiling, but I felt a vague sense of responsibility to this lone survivor, and decided to keep her alive as long as I could.

November 21: This tiny spiderling has spun a teeny tiny web in my basil. I’m worried it will starve :S

November 24: It’s unusually warm today, so I went out into the yard to look for any small midges or other insects that might be suitable to feed to the spiderlings. I couldn’t find any. I am bad at finding bugs in the winter.

The spiders have been spidering successfully for several hundred million years before I came along. They don’t really need me babying them. Still, I feel vaguely worried for them.

November 30: Damn it! Just realized that when I was down by the lake today I should have caught a bunch of midges to feed to the bathroom spiders. Ah well, I didn’t have a container with me anyway. Hopefully they’ll hang around for a few more days and I can go back later.

Unable to find insects, I resorted to buying flightless fruit flies from the pet store. But she was barely half their size, and her web was far too delicate to hold them.

December 15: Fruit flies: acquired! Capturing them and getting the spider to eat them has been…more difficult. So far, only succeeded in wrecking her web. For flies that can’t fly, they sure are nimble little critters.

Anyway, if Spider Twitter has any tips on rearing orbweaver spiderlings, I’d be much obliged! (So far I am just keeping track of the one spiderling but will feed any others as I encounter them as I have too many fruit flies)

I was worried she would starve. I know spiders can go a long time without food, but spiderlings are so fragile and need food to grow. I just kept misting her web with spring water so she would at least be hydrated.

December 20: Going to the kitchen for a late-night glass of water, I sneak over to the basil plant in the windowsill. The orbweaver spiderling is in her web, feeding on a leftover bit of a fruit fly I carefully put there for her.

A week after that, her web was strong enough to hold an entire pre-killed fruit fly.

A few days later, as I was washing the dishes, I glanced over and saw her hanging upside down from a thread attached to the underside of a leaf. She was molting!

January 11: Got home from City Hall to find the orbweaver spiderling molted again!

Spiders, like all arthropods, have a tough exoskeleton they periodically shed. Right after a molt, the new exoskeleton is soft, and they use hydraulic pressure to “pump it up” so it is bigger than the old one. In this way they gradually grow bigger and develop the organs they need to reproduce. They molt more frequently as spiderlings; the older and bigger a spider is, the longer the process takes.

There are a few signs a spider is preparing to molt. They typically stop eating and secrete themselves in a safe place. In the very late stages their legs darken—it’s the new exoskeleton becoming visible beneath the old one. Then they suspend themselves upside-down from a thread, and pump haemolymph into their cephalothorax—the front body segment, with their head and legs—until the exoskeleton splits along the sides, the top peeling off front-to-back like a sardine tin. The legs come out last—the most arduous part. They rhythmically squeeze and stretch their pale, tender new legs out of the old exoskeleton. When they are entirely free, they hang by the thread for a little while more, flexing their legs back and forth. Then they quickly retire to a safe place until their new exoskeleton can harden completely.

January 20: The orbweaver in the basil plant is now roughly the size and colour of a coriander-seed and her latest web is the size of my palm. She eagerly snatches the dead fruit fly from my trembling paintbrush.

January 23: Spider update: this morning on the way out of the house I checked in on the orbweaver, who has been hiding in her dead leaf for days. She wouldn’t come out, but I found an exuvia (shed exoskeleton) on the windowsill!

I think it might be that the larger a spider gets, the longer it spends in pre-molt and the longer molting actually takes. Could be wrong though.

January 25: I marvel at how quickly spider silk absorbs water sprayed on it, with no visible change in its properties. Today when I misted the web the spider scrambled out from her hide and began pulling legfuls of silk into her mouth, tearing down entire segments. I knew spiders recouped energy by eating their old webs, but it hadn’t occurred to me they could hydrate themselves that way.

Today she wove the largest web yet! At this rate she will outgrow the basil before spring, knock on wood.

January 29: The orbweaver’s latest web is over 6 inches in diameter and anchored to the windowsill, not just the potted plant. Things might be getting a bit out of hand…

I have prepped a new more contained habitat for her, a decorative birdcage wrapped in cheesecloth. I am going to put some fake plants inside first, to give her a “frame” for her web and something to hide in. Smaller than she is used to, but hopefully enough.

Outdoors, I have seen her kind making webs over a foot across!

February 7: After living peacefully in the basil for months, the orbweaver was seized with wanderlust. She climbed all the way to the top of the window, then began to trek across the kitchen ceiling. I retrieved her and put her back on the windowsill, and then she tried to go behind the knife rack, which would not do.

So then I put together a sort of terrarium thing in a decorative birdcage, with moss and fake plants, with pantyhose stretched over it to keep her inside. But she would not make a web, and I realized I wouldn’t be able to see one through the pantyhose anyway. “If you love something, let it go.” So with trepidation I put her back on the basil again.

It has all been a bit stressful, after months of pleasant routine.

Anyway, the other day she finally made a web in the basil again! Smaller than her last one. I have put several flies in it so far, which she ate.

I need to get some more flies. The culture I made kept the flies from dying but was not sufficient to produce more flies.

February 16: Orbweaver update: she hadn’t made a web since molting several days ago. I was getting worried, so this afternoon I carefully placed a freshly killed fly on the leaf next to the one she was hiding under. Just now I saw she had emerged and was chewing on the fly! I immediately put a couple more flies in the freezer for later.

Me on the Internet: actually, spiders are actually very resilient creatures and can survive long periods without food, months in fact, see papers X, Y, Z

Me at home: oh my god she hasn’t eaten in a WEEK she’s DYING

Me on the Internet: Spiders are appealing for the same reason people are fascinated with wolves or lions; they are fearsome predators in their tiny realms,

February 21: Yesterday the orbweaver finally made a (small) new web, and she has eaten two of the three fruit flies I put in there for her. I also fed the sac spider one fly directly, and there are a couple more roaming around her jar in case she is hungry later.

I saw (and sadly can’t re-find) an article about how spiders’ silk may stronger as they grow to catch bigger prey. This seems to be so with the orbweaver. Her latest web is not very big, but it easily holds several whole flies. I remember when I had to cut dead flies in half so they were light enough to stick in her web!

Update: I found that article! I misremembered. Hungrier spiders weave stickier webs that can hold live, struggling prey for longer.

April 28: …Oh also! yesterday I read Jeff Vandermeer’s Borne, didn’t like it quite so much as Annihilation/the Southern Reach Trilogy, but it was enjoyable. Reminded me a bit of Brent Hayward’s The Fecund’s Melancholy Daughter (Chizine, 2011).

It did give me feels because I will have to release the orbweaver soon, and I hope she settles in my window like her (likely) mother, but she could also just fly away and I’d never see her again and I’m so worried what if something eats her

At the same time it is a bit of a relief, because as I have learned it’s not easy to keep an orbweaver inside. It really requires a specialized enclosure. If I take in another spider it will be a cobweb spider or perhaps a small jumper, I think—they need much less space.

It’s just, you know, I have been feeding the orbweaver since she was a tiny frail spiderling who would probably have died left on her own and she is probably now about half-grown and you get attached, you know?

May 2: Welp…deep breath I released the orbweaver this evening. I put her by the light over my front door, which is a prime spot. She’ll have a jump on the other spiders, who for the most part haven’t hatched yet.

She’s still tiny – body length maybe 5mm, far from the marble-sized matriarchs you see towards late summer – but I’ve seen her through 5 months and several molts. I hope I see her again, hopefully in a big new web full of midges.

I wish I could say I’ve seen her. She might have flown away after I released her—borne on the wind by her silk, like a kite—but even if she had set up camp above the door I wouldn’t be able to tell her apart from the others that live there.

I don’t think I would keep an orbweaver again. They need a lot of space and they’re much harder to feed than spiders that hunt on foot. But I learned a lot from keeping her, and I hope you learned something from this post, too.