So last month, as part of my goal to find spiders in more locations around the city, I took myself on an outing to Corktown Common. The land, once belonging to a hog slaughterhouse (hey, Toronto’s called “Hogtown” for a reason), was reclaimed and redeveloped as part of the West Don Lands revitalization. 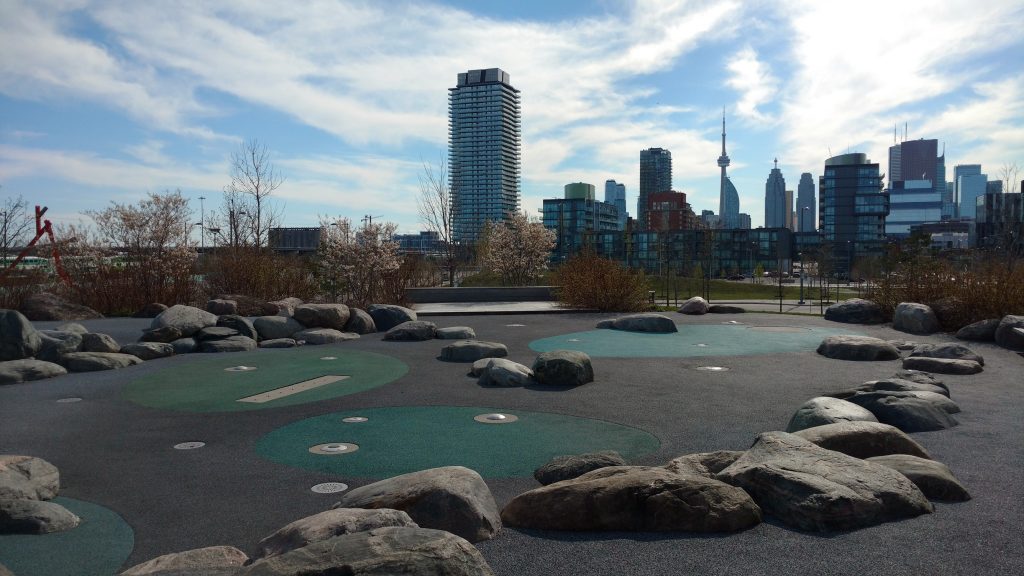 I arrived right at the “golden hour”, and climbed the hill to find a rubber-paved splash pad. Almost straight away I spotted zebra jumping spiders (Salticus scenicus) patrolling the rocks.

I explored the curving paths around the park. To the west was a little patch of wetland, fenced off and planted all round with native trees and shrubs. This running crab spider was hiding in a crinkly leaf. They are generally ambush hunters, but as their name suggests, they can move very quickly! Running crab spiders comprise their own family, Philodromidae, and one easy way to distinguish them from crab spiders in family Thomisidae is that their second pair of legs is longer than the first.

A boardwalk runs through the wetland. I was overjoyed to meet this absolutely gorgeous bold jumping spider (Phidippus audax), who was on the walkway’s railing, pouncing on midges. It’s impossible not to be charmed by these friendly little creatures. Their liveliness and curiosity remind me of puppies; they’ll crawl all over you if you let them.

It’s fascinating to watch them explore. You can almost see the little wheels turning in their heads as they prepare to make a leap. They always fasten a silk tether at their jumping-off point. This one missed a few times and would dangle in the air with her legs splayed like a starfish, looking a bit ridiculous, before getting her bearings and climbing back up. They are not dextrous aerialists, like the orbweavers; their squat, compact form is built for jumping and climbing—more like cats than gibbons.

I circled around to the east of the park, behind the hill, where there is a long swath of meadow criss-crossed with footpaths. Unlike the neatly landscaped hills of Corktown Common, this patch was completely overgrown, full of vetch and thistle. In the wetter parts old railway ties were used as crude bridges. When I stepped on one, there was a flurry of movement from scattering daddy-long-legs (Opiliones). Poking around also turned up some dwarf spiders. Small and glossy, they could easily be mistaken for ants if you don’t know what you’re looking for.

By then the sun was setting, so I headed off to dinner in Leslieville. The whole area is so fresh and new, being built out of nothing. I’m glad the designers of Corktown Common incorporated a “wilder” bit of marsh. The meadow is probably going to be gobbled up or manicured away eventually, so if you want to see it, go sooner rather than later.