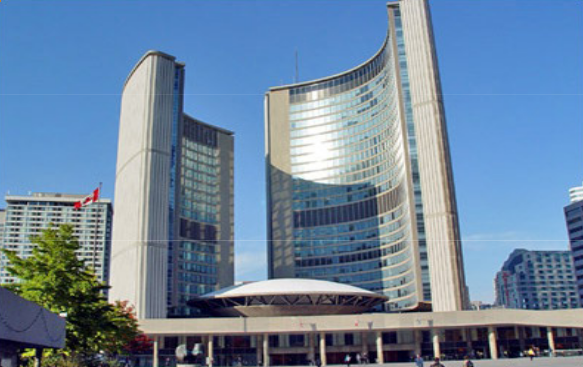 She has several major expenses, ranging from large-scale capital projects to everyday service improvements, all of which she wants to pay for without raising taxes or going into debt. As the nation’s economic hub, Toronto has substantial earning power — but she chooses to take in less revenue than she could.

She recently committed to building a subway extension in Scarborough and “regrets not investing in housing and transit years ago,” Toronto writes in an e-mail. Her SOGR (state of good repair) backlog totals about $7 billion. The Gardiner expressway and TCHC housing stock are crumbling and will soon become dangerous, so she needs to fix things quickly.

Mayor John Tory has promised to implement a poverty reduction strategy and to undo the cuts to bus and streetcar service instituted under Mayor Rob Ford. But with so little wiggle room in the budget, can Toronto afford to maintain her existing infrastructure, let alone invest in building more? How will she come up with the money?

“One of the richest cities in Canada should be able to provide a quality standard of living for all its residents, but we can’t get the numbers to work out and would like some help,” Toronto writes. She relies heavily on residential property taxes and TTC rider fares to balance the budget, but would ideally generate revenue in some way that doesn’t involve people paying money.

What the expert says

Toronto’s expenses are about the highest they will be, and she hasn’t yet reaped the benefits of subsidized childcare, a multi-modal public transit network, or housing security for vulnerable residents. So, having promised a property tax increase “at or below inflation”, she’s feeling strapped for cash.

“It is financially possible for her to do the things that are important to her, although by doing so she risks backlash from politically unpopular decisions,” Park says. Toronto can achieve true world-class status, but she has to make a choice. Either she begins making full use of the revenue tools available to her, or she runs up substantially more debt.

Toronto is fortunate because her residential property taxes are already the lowest in the region — and among the lowest in major Canadian cities. She is in the middle of a building boom that is expected to continue for the foreseeable future. Further, thanks to low lending rates, borrowing money is as cheap as it’ll ever be.

“However, there is a danger in accumulating so much debt because Toronto has set a ‘debt ceiling’ for herself,” the blogger says. “It wouldn’t be financially prudent for debt charges to exceed 15% of property tax revenue. In this case, it may not be necessary because the cash flow problem can be so easily solved.

“If Toronto raises property taxes in keeping with regional averages, keeps the Municipal Land Transfer Tax, opts for a more efficient LRT network rather than expensive subways, and successfully lobbies the province to fund a portion of TTC operating costs, she can live within her means and still afford to house everyone and keep people moving,” Park says.

But Toronto faces more immediate risks. In a rapidly warming climate, she risks having her vital systems paralyzed by flash floods. Not only can extreme weather events put transit out of commission and flood homeowners’ basements, losing hydro power in the summer jeopardizes the lives of her most vulnerable residents. “This is a dangerous and unnecessary risk,” Park says. Toronto should properly fund the Wet Weather Flow Master Plan, which would help mitigate the effects of extreme weather. While she has committed $2 billion to water infrastructure in her draft budget, there are still projects that have been put off till after 2024 for lack of funding.

Note to readers: An earlier version of this Financial Facelift stated that the province of Ontario had agreed to give Toronto $86 million to compensate for a funding gap. In fact, this agreement is still in the works. Also, the article said Toronto had a spending problem, not a revenue problem. The city has further clarified that by “spending” she meant “revenue” and vice versa.

(Thanks to Amy Brown for the idea.)