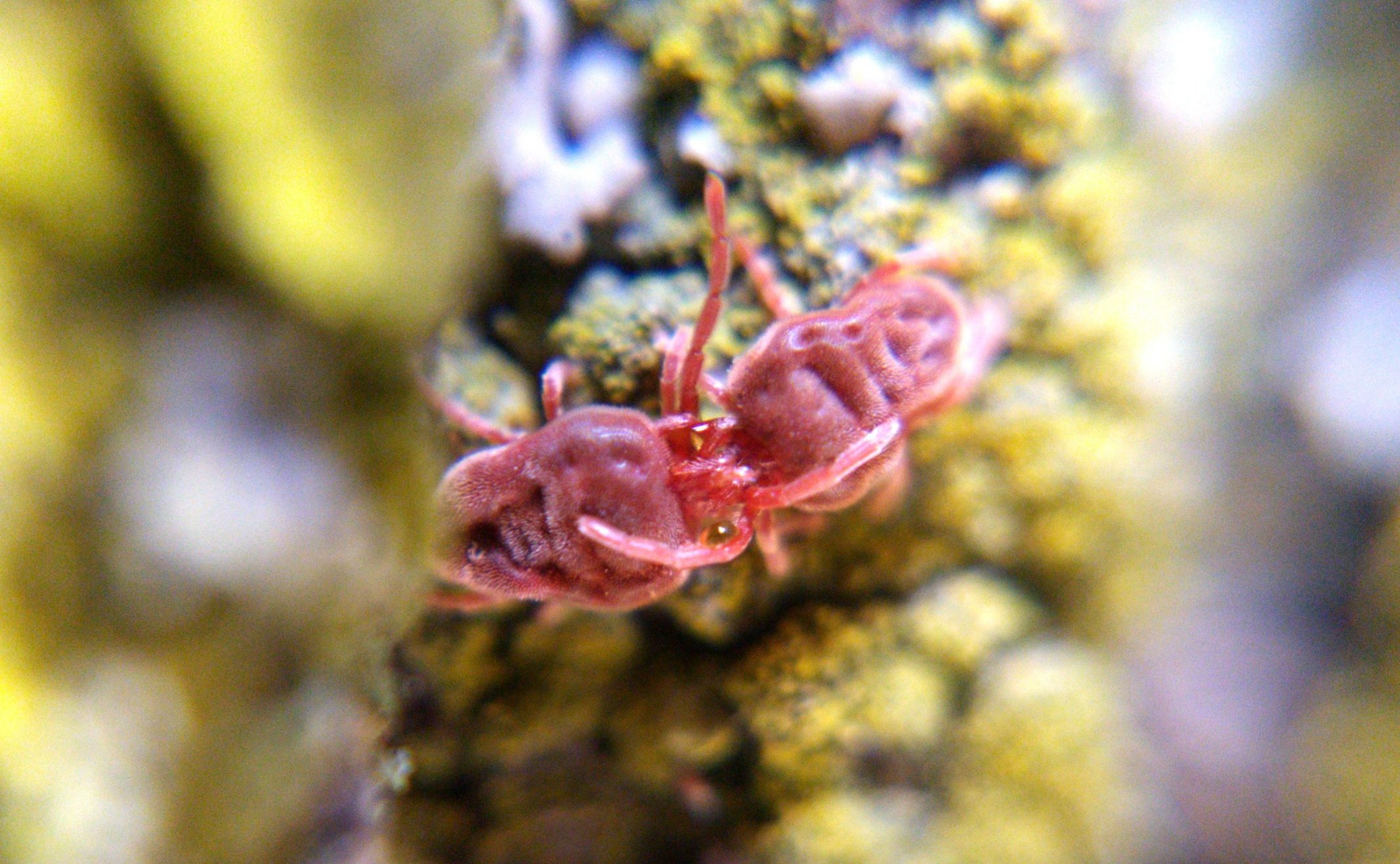 I just love red velvet mites—their soft, plush coats, their Shar-Pei wrinkles, that eye-popping red. Until now, all I’d really seen of their behaviour was eating midges, aphids, and other small insects. But recently I saw something quite astonishing for the first time.

I almost never see them interact with each other—although I did see two eating the same aphid once—aside from occasionally bumping into each other. But in early April, as I was wandering through Marilyn Bell Park looking at the countless red velvet mites clambering up tree trunks, I noticed two grappling with each other, with a third mite hovering around but unable to intervene. One or both must have been wounded, as drops of a clear yellowish fluid appeared clinging to their mouthparts and front legs. After parting neither seemed seriously injured; but it does provide an explanation for the scars I’ve noticed some red velvet mites bear.

Check out the video:

And photos as well:

So, what’s going on here?

As acarologist Ray Fisher kindly identified for me, these are Allothrombium red velvet mites, also known as “sumo mites”. This nickname comes from a behaviour of theirs described in this 1960 paper (Sci-Hub):

The male moved slowly over the area, drumming on the paper continually with his front pair of legs, which were raised at a sharp angle and lowered simultaneously. These movements contrasted with normal exploratory behaviour, when the substrate is tapped by the front pair of legs alternately, similar to the alternate movements of an insect’s antennae. After a few minutes of this methodical tapping, other males began to appear, presumably attracted by the movements or sound of the original male. These in turn began tapping movements and often strayed onto the defended area; an encroaching male was immediately engaged by the territory defender in a strenuous wrestling match. The two males met head-on, grasped each other with their pedipalps and tapped each other vigorously with their front legs, while at the same time each endeavoured to maintain its footing and wound its adversary with its chelicerae. The struggle lasted from several seconds to over a minute. The loser ran, walked or wandered aimlessly away, depending on the severity of the contest; the victor followed as far as the boundary of the territory but made no move to follow once the defeated mite was outside the defended area. The victor then returned and continued his drumming, ready to engage other males. The same male may take part in several battles and may or may not succeed in defending his territory against all comers. Occasionally the original territory holder may wander a short distance away from the defended area, but returns almost immediatelv.

P. S. I mentioned this to a sumo-loving spider tweep, asking, “How’s their technique?” I expected her to scoff, but she declared it “perfect” and sent me this video. The resemblance is really uncanny!