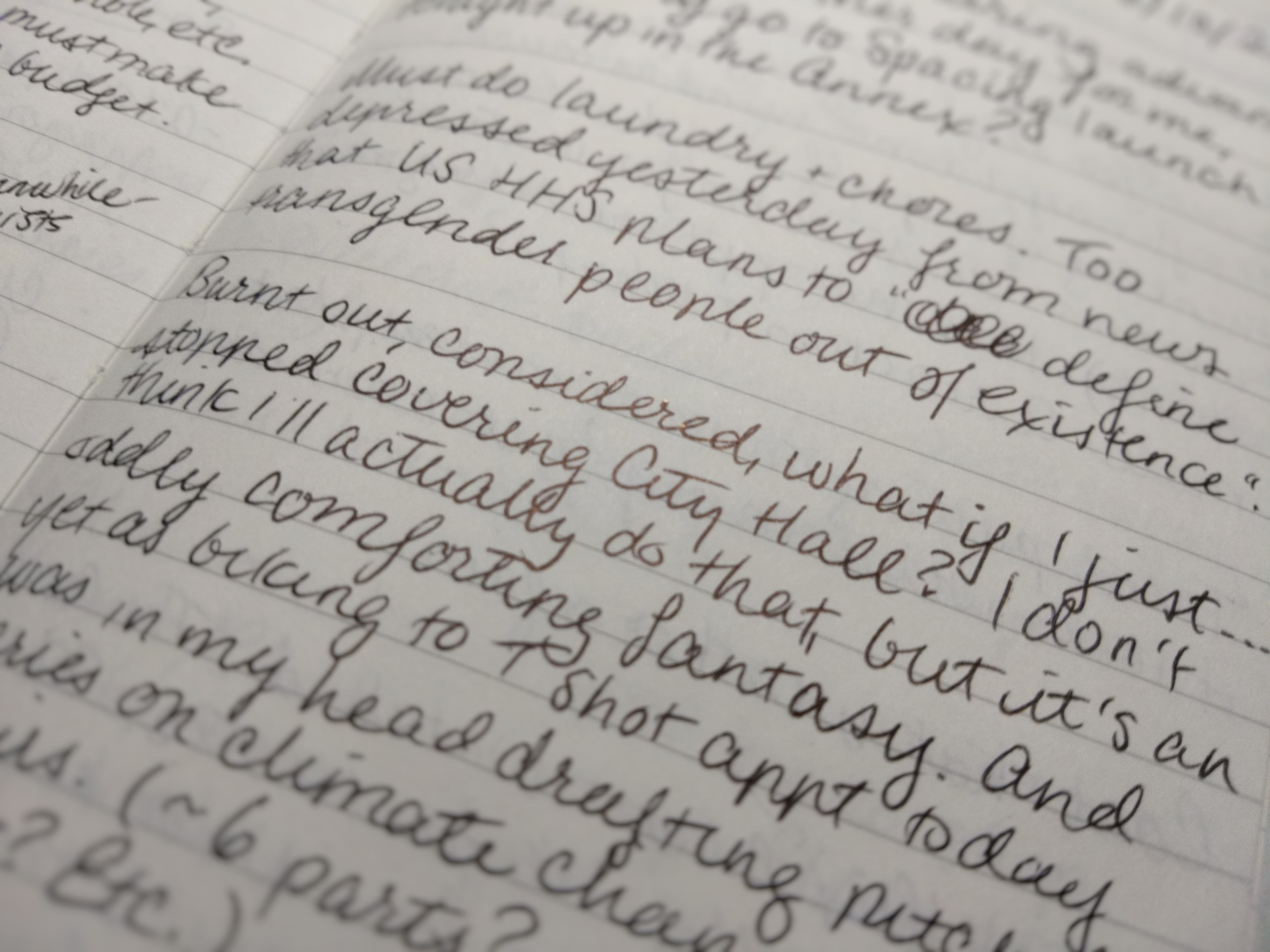 Note to readers: I am taking a hiatus from the whole City Hall thing. I’ll soon be cancelling all your recurring Paypal donations and putting the Patreon on hold.

It’s not about money or the work or anything. It’s just an existential despair thing, you know?

Thank you for your support over the years. I could not have done it without you.

If you want the long version, here you go.

It started as a scribble in my journal. It was October 22, election day in Toronto—the end of a chaotic, heartbreaking campaign where Premier Doug Ford (writing that still feels like a sick joke) unilaterally cut Council in half. The day before, news broke that the US’s HHS planned to “define transgender people out of existence”.

Burnt out, considered, what if I just…stopped covering City Hall? I don’t think I’ll actually do that, but it’s an oddly comforting fantasy.

Local politics has been my world for seven years. Going about my life not knowing every single item every committee was discussing would feel like…idk, not checking the weather. Not looking at my bank balance. What would I do all day?

And then the election happened and they elected Nunziata to be Speaker again and that’s when I realized Tory really was doubling down on doggedly maintaining the status quo even as everything crumbles around us—the environment, the social safety net, the human rights acquired over my lifetime, is the world I know destined to be a brief blip in time before we descend into a shitty grimdark reboot of the 20th century? (Sorry. We seem to have gotten off track. Anyway—)

That’s what City Council reminds me of, a reboot. It’s a parody at this point, an ageing handful of the original cast dragged out again for a remake no one asked for. I hung on for the first meeting, and then the holiday party, but honestly I’m done. I don’t know for how long. Maybe a year. Maybe I’ll snap out of this by budget time. I just need to occupy myself with things that don’t destroy my mental health.

I’m basically feeling like what Scaachi Koul says here, except the part about having a loving partner who makes it all worthwhile. Though, who knows. Since reading this piece by Brandy Jensen I have started to entertain the possibility of maybe dating again, in the way I think about what I would do if I were Prime Minister. It’s kind of wild that a single article can so radically change my mind on something like that.

I don’t think I’ve changed anyone’s mind by writing about politics. On the other hand, I have definitely changed people’s minds by tweeting about spiders, though. I have totally saved spider lives. Maybe, sometimes, that’s all I have to do.

5 thoughts on “Pivoting to Spiders”