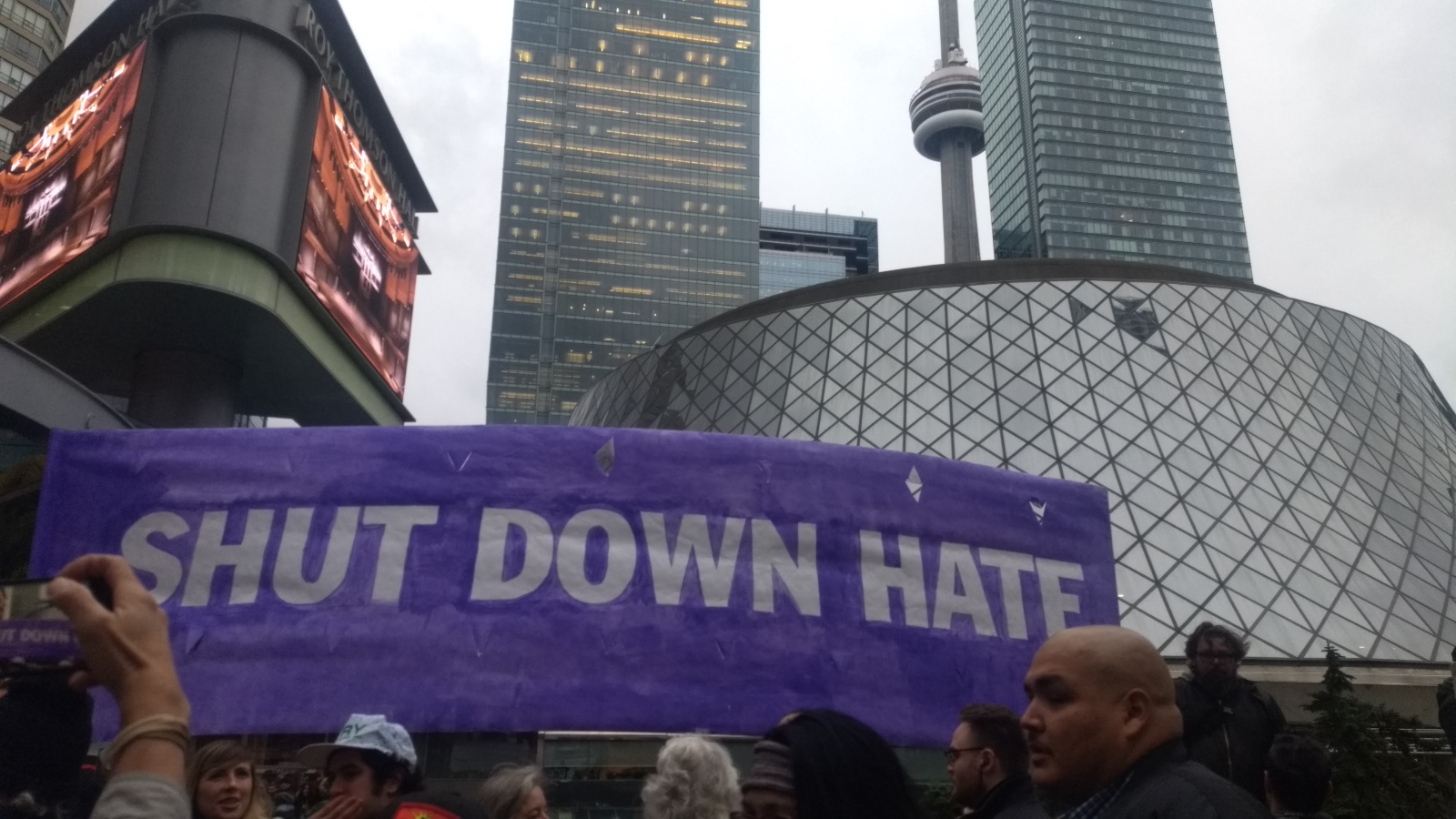 You’re saying you can’t have a civil discussion with fascist? Yep. Yes I am . More importantly why can you ?

Organizers No One Is Illegal:

We gathered to reject the narrowing of the political spectrum of action provided to us by institutions like The Munk Debates. Institutions like The Munk Debates—funded by notorious Canadian mining company Barrick Gold1—continue to tell us that the ideologies on either end of the spectrum are white supremacist/ white-nationalism-fueled by right wing extremism like Bannon, and extreme conservatism like David Frum.

Over two thousand of us poured into the streets in protest against those who continually deny our humanity and put us in danger. We came face to face with thousands of Torontonians, who had purchased tickets and lined up to listen to Bannon and Frum’s lies. Inside, they faced disruption. Two banners were dropped condemning the racists.

Thirteen brave protesters were arrested that evening, and were subjected to harsh treatment by the police. We support and will continue to support all those who were arrested rejecting hate.

It’s been weeks, and I just can’t get over the sight of hundreds of people wearing poppies as they lined up to thoughtfully consider the viewpoints of a warmonger and a fascist, not a week after an anti-Semitic conspiracy theorist carried out a mass shooting in a Pittsburgh synagogue. I couldn’t go to any Remembrance Day ceremony; wearing a poppy would have felt like a sick joke. “Lest we forget”, we say, but we’ve already forgotten.

My updates from the protest can be found on Mastodon and Twitter. And this is what I wrote shortly after the protest:

So this evening at the protest I saw a couple of people I know from City Hall.

They’re “frequent fliers”—people who are always around, frequently making public speeches to committees, on their own time. Eccentrics or cranks, you might call them. A little bit sketchy.

And I realized, you know what, this guy is a crank, but he’s obsessed with saving the environment. This guy’s kinda sketch but he’s really against police brutality. And when it comes down to it, they’re on the outside, protesting with me. Not on the inside, livetweeting bigots.

I’ve been thinking about dressing more professional, and learning how to be a proper, respectable journalist. But tonight made me second-guess that.

So many respectable, well-dressed people in line. Including journos and politicos whose respect i’d be trying to earn.

I realized that at the end of the day, I know who’s on my side. It’s the people standing out in the cold, protesting. Not the well-dressed, well-connected people standing in line, to be seen, to pay money and attention to bigots and warmongers.

The people on the outside, the people who have my back, who respect me—they don’t care what I wear or where I’ve been published.

The people on the inside, they’d be tweeting and filming as people like me were dragged away to camps. They’d debate it on their shows or podcasts.

Fascism is a hydra with so many heads—Islamophobia, imperialism, colonialism, anti-Blackness, misogyny, anti-Semitism, environmental destruction, anime avatars—all coming from one body. You will find many people who specialize in being against one or two of these things, but there are only a few people who will come out to oppose all of these things (and bring food and stuff), because they understand it is all connected, and it’s all of us or none of us.

In conclusion, I am going to try to learn jernalism basics. But I am not going to spend money on uncomfortable clothes. Or try too hard to get published places. Because none of that will help when they try to take away my rights, or my citizenship, or my freedom, or my fucking life.