Since 2010, the City has really cut back on its spending. How has it kept costs low? 1. Other levels of government are picking up some of the tab (“cost-shared social programs”); and 2. Putting stuff off. Especially capital projects, like building transit or repairing social housing.

Instead, we’ve been increasing other revenue, like user fees, water and garbage rates, and TTC fares. Thanks to the booming housing market, we’ve also been making a lot of money from the Municipal Land Transfer Tax. As I explain here, betting on the housing market is a bad idea. And yet the last budget Council passed depended on the assumption that MLTT revenue was always going to be this high.

Year after year, City Council has voted to kick the can down the road rather than grapple with the fundamental problem. Like I said:

[E]very year the City budget starts off with a big shortfall because we always take in less money than we have to spend […] The only ways to get around the structural deficit are a) start taking in more money, permanently; or b) cut back on services, permanently.

Okay, so if you’ve been paying attention you probably already knew all that. So here’s some hard numbers. 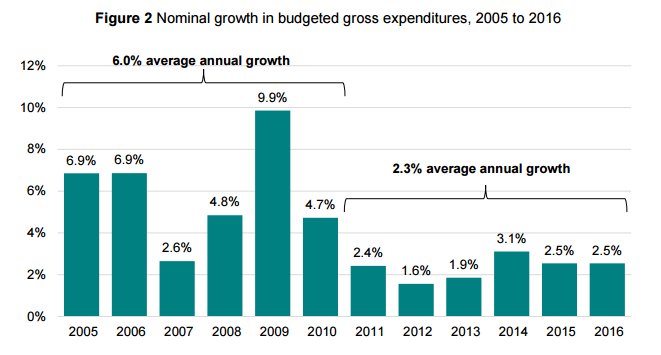 Here’s how much the budget has increased every year. As you can see, Tory’s tenure is pretty much a continuation of the Ford years.

Now, most of this spending growth isn’t adding new stuff. It’s just keeping up with the rate of inflation—we have to spend more money because a dollar doesn’t buy as much as it used to. Inflation is usually around 2% a year.2

There’s a second reason the City’s dollars don’t go as far: population growth. Even if we kept spending exactly the same, we have to provide services and infrastructure for a larger number of people. The report estimates Toronto grows by 1%, or about 30,000 people, every year.

That means that spending the same amount of money (in real terms) per person requires growing the budget by 3% (in, uh, fake terms) every year. 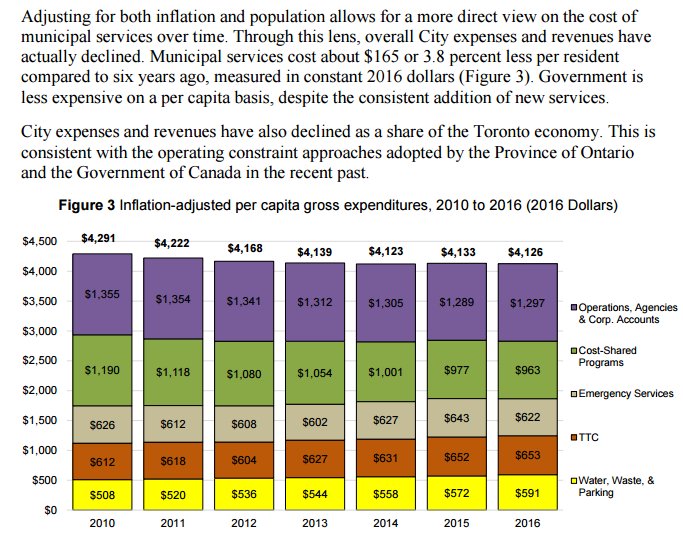 Turns out that once you factor in inflation and population growth, spending is actually going down. The City is spending almost 4% less ($165 per person) than it did six years ago. And at the same time, new programs, services, and infrastructure are being added. Especially infrastructure. We’ve run up a tab of $29 billion in capital projects that we’ve promised but don’t know how to pay for.3

On the revenue side, I previously mentioned that the decrease in property tax revenue has partly been achieved by increases in literally everything else.4

Over the past six years, TTC revenues have increased by an average of almost $50 million annually – representing cumulative inflation-adjusted growth of 17.7 percent over 2010 levels or about three percent per year. During this time, more incremental revenue has been collected by the TTC ($303 million) than from Council-set increases to the property tax rate ($237 million).

In inflation-adjusted terms, the MLTT has grown by 167 percent from 2010 levels. This is about seven times greater than the growth rate for any other source of City revenue during this time. As a result of this rapid expansion, the City now collects about 1.5 times more revenue through the MLTT than it did six years ago.

The rise in the MLTT has been essential to Council’s ability to maintain at or below inflation-level property tax increases. To a large extent, current finances rely on what has been a windfall revenue gain from a buoyant real estate market.

So one should be cautious of claims that all of this has been achieved by finding “efficiencies” and savings:

The report says (emphasis theirs!),

Recent patterns of savings and efficiencies are nearing practical limits without service changes or other direction from Council.

“Service changes” = service cuts. “Other direction” = revenue tools. But what to cut and what to add are big enough debates on their own, so I’ll end this summary here. For a more detailed read-through, see my Storify.