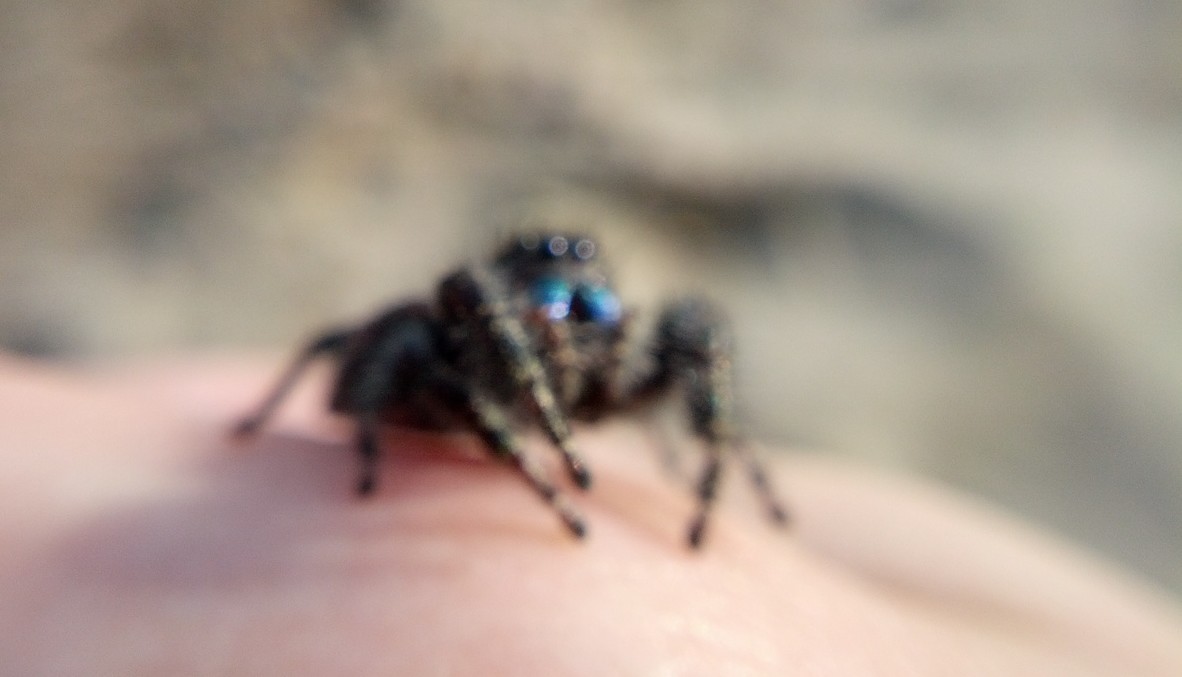 Most wild animals are either indifferent or fearful towards humans, preferring to run away when they realize a human has noticed them — or attack when they cannot escape. Spiders are no different in this regard. Many of them are too short-sighted, or live on too small a scale, to recognize humans as other animals and not, say, unusually mobile parts of the landscape. If they do, they deduce that we are neither food nor fellow spiders (for spiders, generally antisocial creatures, these overlap considerably), and they try to get out of our way.

All this means that watching spiders is generally a one-sided relationship. Jumping spiders (family Salticidae1) are an exception — spiders that watch back.

Like wolf spiders, jumping spiders are active, agile hunters that have excellent eyesight. They hunt during the day, and can often be found on vertical surfaces like walls, trees, and posts. While they don’t weave webs, they still use silk, habitually anchoring themselves with a thread of silk while moving around, the way mountain climbers use rope (if rope were disposable and renewable). Some also release silk while jumping, using it as a dragline.

Despite their nervous-seeming manner,2 many jumping spiders are curious and positively fearless. One common jumper, Phidippus audax, even has it in its name (it’s the same root as audacious). While my main obstacle in photographing spiders is keeping them from running away, with jumping spiders I just as often have the opposite problem: they will run up to the lens and eagerly investigate my phone. When I can catch them on camera, they obligingly stare at the viewer with big anime eyes3. Sometimes they even cock their heads, which is adorable.

(I swear, once while I was trying to corral a zebra jumper on a railing, it stopped running around and looked into my eyes pleadingly as if to say “Can’t you please let me go?” I had to leave it alone.)

By far the species of jumping spider I have encountered most this summer is the zebra jumper, Salticus scenicus. Scenicus means “theatrical”, and while our native jumpers may not hold a candle to, say, the peacock jumping spiders of Australia, I think the zebra jumper’s bold, snazzy stripes are still pretty striking. They are on the smallish side, getting about as long as my pinky fingernail. I don’t know whether I’ve found so many zebras because they are actually more common, or because they are just better-suited to living in human environments. (The fancy expert word is synanthropic.)

This one was quite staid, letting me get very close with the camera.

The ones I’ve found on my building have been very shy and none of my hasty photos have turned out. I suppose it goes to show that temperament can vary within a species.

Salticidae is a big, diverse family, even here in Ontario, which isn’t exactly a biodiversity hotspot. I’m telling myself that’s why I haven’t identified these, and not because I haven’t been too lazy to page through BugGuide. These two I found in High Park. While it’s perfectly possible to find spiders hanging around human places like bridges, hedges, windows, etc., you’re only seeing a small piece of the picture.

This one was absolutely tiny. The trunks of trees are a good place to find jumping spiders — as they are visual hunters, a vertical tree trunk gives them a good view. You’ll often see trees wrapped round with strands of silk laid down by spiders as they maneuver around the trunk; it’s like spider footprints.

Unknown, But Definitely Not Ants

These next ones are ant-mimics. From above, these spiders’ size and body shape allows them to be taken as an ant at first glance, but there’s no mistaking those big front-and-centre salticid eyes. The ones I’ve found are also distinguishable because they don’t move like ants,4 nor do they mill around with them.

There are many different ant-mimic spiders around the world, and some go to truly extraordinary lengths. Why mimic ants? The main reason is that a lot of predators avoid ants because they taste gross and fight back with acidic venom. By mimicking ants, spiders can fool predators into avoiding them, in the same way that non-poisonous butterflies come to resenmble poisonous ones. Mimicking ants in particular, however, is such a common strategy in the insect world that there’s a name for it: myrmecomorphy.5

As you can see, this is a bigger spider. I’m not sure whether it’s the biggest kind of jumping spider in this area, but it’s definitely up there. It has distinctive white spots on its abdomen, tufty hair, and iridescent chelicerae (mouthparts) that shift between green, blue, and bluish-purple.

This one lived in a hole in a railing down by Sunnyside Pavilion, and I have encountered it two times. The second time I carried it into a patch of shade to let it run over my hand.

It ran up my arm to the back of my neck, and I couldn’t find it, even after a careful pat-down and examining my clothes. I assumed it had just run off.

To my extreme surprise, an hour later it emerged (from God knows where!) while I was on the way home, to drink up some water I had spilled on my sleeve. (Props to the good people of Parkdale for not giving a second glance when I yelled at it “Where WERE you?!”) I felt obliged to the little creature, who I had inadvertently taken from its home, and carried it back to my garden cupped in my hands.

Being trapped like that, it would be entirely justified in biting me, but it didn’t. It would only insistently butt its little head against the gap in my fingers, trying to squeeze through. Anyway, I got it safely home and put it on a flower. It looked around, glanced back at me, then scurried down the stem and into the undergrowth. I haven’t seen it since.