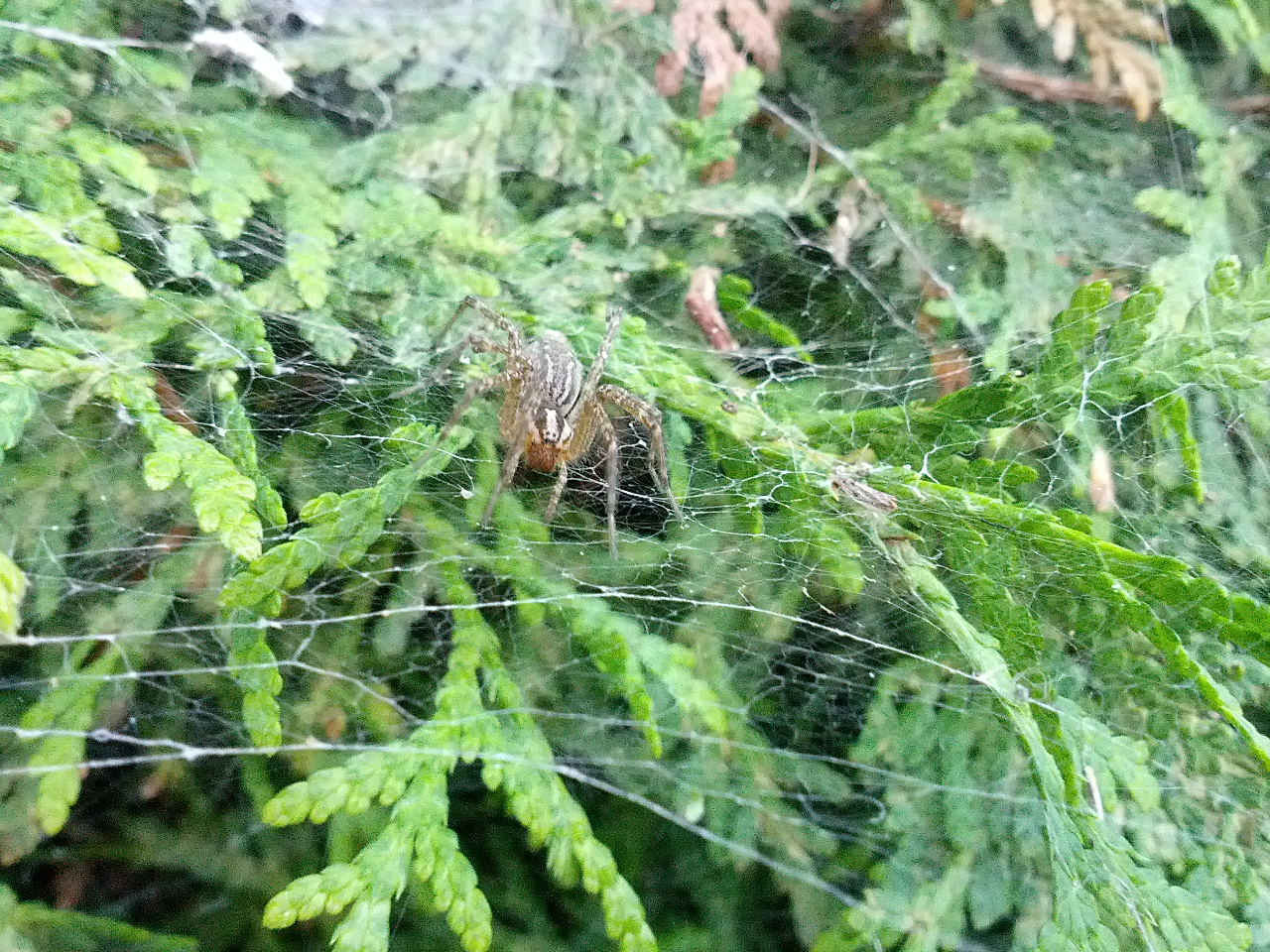 This may be my last spider post of the year. Spiders’ lives are short here, and for the past few months they have had one obsession: to mate and reproduce before they die in the winter cold. Males go wandering in search of females, often getting lost and ending up in people’s houses. Females make as many egg sacs as they can, which they will guard until they die. If the eggs last the winter, they will hatch in the spring.

Before getting into the details of spider mating: quick primer on spider appendages. Right below their eyes, spiders have mouthparts called chelicerae (fangs), a feature they share with related arthropods like scorpions, mites, and ticks. (This group of arthropods is called Chelicerata, natch.)

On either side of their chelicerae, before the first pair of legs, are short appendages called pedipalps. Spiders use their pedipalps much like they use their legs: to touch, taste, and smell, and to handle food. In mature male spiders, pedipalps have an additional use: delivering sperm. Sperm doesn’t actually come out of the pedipalps; spiders’ genitalia are in their abdomen. What male spiders do is make a silken mat or web, deposit sperm on it, and then draw it up into special ducts in their palps. During mating, he transfers sperm from his palps to the female’s epigyne (external genitalia). The female stores it in her spermatheca, a pouch in her reproductive tract. Later on, she may use it to fertilize her eggs.

The ends of a male spider’s palps, which contain the sperm ducts, are large and bulbous and may be specially shaped to better fit into females’ epigynes. The shape of spider genitalia varies greatly, and sometimes looking at them under a microscope is the only way of telling species apart.

See if you can find the spiders’ pedipalps in these photos:

When Should You Rip Off Your Own Genitalia? A Helpful Guide

The other day I was thrilled to find a male Zygiella with only one palp. It may seem trivial, but it’s evidence of how dangerous spider mating can be. When the stakes are this high, males adopt some truly drastic measures.

One might assume that the spider lost his palp in a tussle with a female. Females often eat males after mating with them, and males may not make it out alive without a fight—that is, if they want to. In some cases females are more likely to use the sperm of mates that made the ultimate sacrifice. For males, who will die soon anyway, it may be a good strategy.

Sometimes the female will break off the male’s palp during mating. While she eats the male, the disembodied palp keeps releasing sperm. The male does get something out of the arrangement: his palp acts like a plug, hopefully preventing other males from mating with her.

Should the female not eat him, the male has a great advantage. With one or both palps gone he’s now much lighter and faster, the better to fight off rival males. (Another possible explanation floated by scientists is that he fights better because he now has, uh, skin in the game—and nothing to lose.) In fact, losing a palp can be so advantageous that sometimes the male tears off one of his own palps beforehand. After all, you really only need one, and losing that dead weight might let you get to a female before the other males do.

The next time a spider wanders into your home, check out its pedipalps! Then set it free so it can have more gross, violent, dismember-y cannibalistic sex.